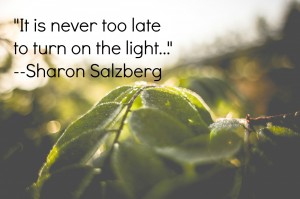 When you flip the switch in that attic, it doesn’t matter whether its been dark for ten minutes, ten years, or ten decades.

The light still illuminates the room and banishes the murkiness, letting you see the things you couldn’t see before.

Its never too late to take a moment to look.”

When I was learning the basics of Zen meditation, I learned a useful metaphor for mind-training: train your mind like you would train a puppy. Your mind is a wild and playful puppy. It goes where it wants to go, and does what it wants to do, often oblivious to the consequences. You put the puppy in one place and say “sit,” and it sits for a second and then runs around again. You can’t get mad at it, since it is just behaving naturally (and so cute!). You can’t give up, or the puppy will never get trained. You just patiently– again and again–put your puppy-like mind back in its place until it learns what it needs to learn. One hundred times, or one million times.

My teacher gave me a “method” of mind training: counting my breaths. I was supposed to count to ten, and then start over again until the meditation period came to a close. Simple, right? No.

The first thing I noticed was how hard it was to get to ten. I couldn’t even make it to five without my mind wandering off. It was extremely frustrating and discouraging to be faced with with how little control I had over my own mind. Since the meditation sessions lasted 20 or 30 minutes, I had no choice but to start afresh with each new moment and each new “failure.”

The mental component is the most important part of losing weight and keeping it off. It is what makes habit change so difficult. Negative thoughts sabotage our goals. Pessimistic thinking prevents us from starting over. Rationalization leads to skipping out on exercise class or eating the wrong foods. Denial prevents us from even starting a weight loss program. Self-hatred leads to lack of self-care. Habitual thought patterns are our worst enemy when trying to lose weight.

The second mental habit is common with people who have gained a lot of weight over a period of time. The amount they have to lose is so daunting, and so discouraging, that they figure, why bother?  They avoid the issue as the pounds—and health problems—increase.

The wisdom found in Sharon Salzburg’s quote applies to both of these categories: “It is never too late to turn on the light.” At any point—at any moment—we can begin anew with the light of compassionate awareness. It doesn’t matter if we (like the unruly puppy) repeatedly backslide. We just return to the present moment, “turn on the light,” and pick up where we left off.

With repeated, sustained effort, the mind can absolutely be trained. The puppy can be turned into a well-behaved adult dog. However, it is not through force of will. (I don’t like the term “will power.”) The mind is trained with practice, which leads to “skill power.” There is no mystique to it, or esoteric formula delivered from a guru. There is only practice.

We develop skill power in the mental realm the same way we do in the physical realm: repetition. It is not necessary to begin Zen meditation or to become a hermit in a cave. There are many ways to train the mind. Practice “moving meditation” (martial arts, yoga, pilates, mindful walking, or any physical discipline or sport that incorporates intentional awareness into its training). There are many non-sectarian centers that teach the basics of meditation. You also don’t need to spend hours each day doing this. Consistency of effort is the most important factor.

As we begin to shine the light of awareness on our habitual mental patterns, we realize that the battle is fought and won in the mental arena. Know that setbacks are part of the process, and every moment is a new moment to work on our mental habits: “It is never too late to take a moment to look.”

Begin to get used to the idea that along with your diet and exercise, you will need to train your mind. And know that your mind will require the same consistency, compassion, and repetition that you would extend to an unruly puppy. Practice in the spirit of Sharon Salzburg’s optimistic quote, with each moment as a fresh opportunity. Over time you will see results in the mental arena that support weight-loss related habit change.